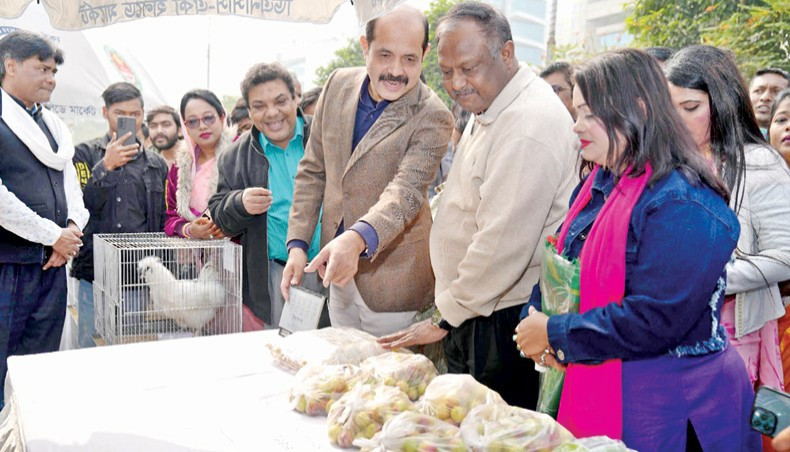 The first-holiday market under the Dhaka North City Corporation was inaugurated on Friday in the capital’s Agargaon.

Commerce minister Tipu Munshi inaugurated the holiday market as chief guest of an event organized at the new administrative zone of DNCC, said a press release.

Organizers said that a total of 100 shops with different types of products of Cottage, Micro, Small and Medium Enterprises (CMSMEs) and food items will be sold on holidays — Friday and Saturday.

The market is open to all.

Tipu Munshi stressed more women were involved in trade and social activities as they were half of the total population. He also suggested expanding the market ensuring discipline.

Organizers said that the shops in the holiday market will display products made of leather, jute and handloom and food and drinks.

If the holiday market gets successful, the city corporation will launch 54-holiday markets at its 54 wards in phases, announced Atiq, also president of Oikko Foundation.

The mayor said that customers would get good quality products at the markets made by local small entrepreneurs at cheap rates.

He said that in developed countries there were holiday markets and evening markets that DNCC wish to replicate.

‘Trade license services, app based on street car parking and rickshaw licensing will be digitalized soon,’ he said.

The mayor said DNCC was working to bring discipline on the footpath. The hawkers at Mirpur 10 intersection sell products after office to keep the street free from traffic jams.

In 2007, Dhaka South City Corporation started such holiday markets at 20 places in the city but they turned flop within a few months, with an exception. And the exception was the market adjacent to Ideal School and College, at Motijheel that survived.

Most of the markets closed due to changes in governments, court orders, and local people’s opposition

Again, in December 2016, the city corporation reopened its five-holiday markets across the city in a bid to rehabilitate street vendors and make the city roads free from hawkers.

All the markets are not in function now due to huge extortion and mismanagement while hawkers occupied almost all streets throughout the weekdays foiling the main aim of the needs.