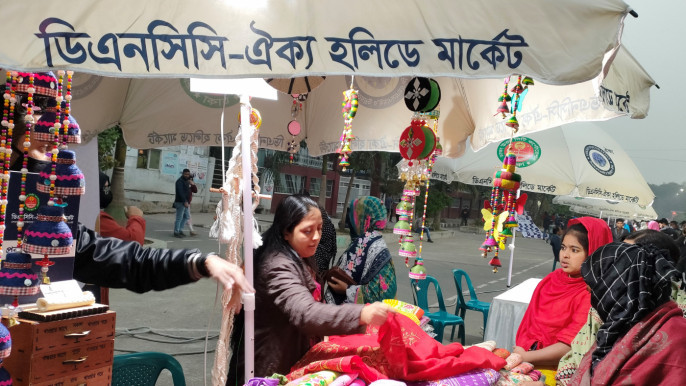 A holiday market has been launched on an experimental basis in the Agargaon area of the capital with the products of about 80 small and medium enterprises (SMEs).

Different small and medium businesses will get the opportunity to rent shops at Tk5,000 in the market on Friday and Saturday every week. However, many of them said the fee was unreasonable, and such a great initiative can be ruined due to such high fees for only two days.

Since the opening in the morning, buyers and visitors thronged the stalls and their presence increased in the afternoon.

Robin Hossain, manager of Recall Green nursery in Mirpur, brought different types of native trees, flowers, and cactus to sell in the holiday market. He said the sales were low at the market, despite the fact that there were many visitors.

“I came thinking that the sales would be low as it was the first day of the market. Many people here liked our cactus or flower plants, but most of them did not buy anything after hearing the price. Our trees are special compared to others so the price is a little higher,” Robin Hossain told TBS.

Jasmin Akhter, an entrepreneur from Uttara with a stall of different types of spices, rice and dry fruits, told TBS, “I work with various domestic agricultural and food products. We collect spicy ingredients and make masalas by ourselves. We make oil by crushing the mustard in our own wooden grinder. Customers can buy safe and natural food products from us.

“The sales were low on the first day morning, but many people came and collected our  organic products in the evening.”

Mohammad Alal Sardar of Farming Life BD brought cherry, cabbage, celery leaves, lettuce, capsicum and other salad items from Ashulia. He told TBS, “I brought about 40 kg for the first day, about 25 kg of which was sold. All our products are high quality. They are used as salad in big restaurants.”

Commerce Minister Tipu Munshi, chief guest at the inauguration ceremony, said, “If such small markets are opened in different parts of Dhaka city, the scope of entrepreneurs’ participation in these initiatives will increase.”

Warning of mismanagement in the holiday market, the commerce minister said local ward councillors and senior police officers have to perform special duties to prevent irregularities.

Commerce Minister Tipu Munshi said, “The holiday market is the result of innovative thinking. Such markets, modeled on the developed world, would encourage entrepreneurs and consumers. The SME sector’s contribution to the local market is still 25%, which needs to be increased to 50% to have an impact.”

At the opening ceremony, the Dhaka North Mayor Atiqul Islam said, “The entrepreneurs who came here make products with their own hands, so there is no opportunity to sell adulterated products here.”

Atiqul Islam announced that holiday markets will be launched in each of the 54 wards of Dhaka North if the pilot project in Agargaon is successful.

He also said there will be a “cultural corner” on one side of the holiday market for the recreation of the visitors.

However, most of the small and medium entrepreneurs said that it is unreasonable to charge a fee of Tk5,000 for just two days.

Abida Sultana, owner of Bridal Creation, told TBS, “Tk5,000 for renting a shop for only two days is a huge burden for small entrepreneurs like us. Even many fairs do not charge such a high fee. Many of us cannot even get a return equivalent to that amount.”

Another entrepreneur, Debbrata Burman, assistant coordinator of Taranga, Told TBS, “It is not possible to rent a stall with Tk5,000 every week. We bring our products from Bandarban. It may not be possible to make a profit covering all expenses with our sales. The market may sustain, but we may not with such a high fee.”

However, sources at the Dhaka North City Corporation said the fee will be reduced in the future as they have different plans to attract small and medium entrepreneurs to this market. The market managers might consider returning a portion of the shop rent if the sellers do not make a profit or suffer losses at the market. Moreover, the customers will also have an opportunity to return the products to the sellers if they are not satisfied with the quality.

Apu Mahfuz, chairman of Oikko Foundation, told TBS, “Since we are starting the holiday market as a pilot project, everyone has to contribute a little. The fee has been fixed in coordination with Dhaka North City Corporation and Oikko Foundation. The issue might be reviewed in the future. The Dhaka North mayor might even make the stalls free of charge.”